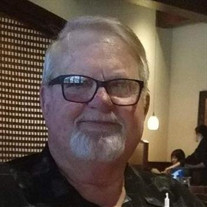 Alvin Ray Hamilton passed away on February 5, 2020 in Nashville, TN. Born on July 2, 1947 to Lera Bailey Hamilton and James Ivy Hamilton in Cumberland, MS. He was a long-time resident of Mississippi before moving to the Nashville, TN area. Ray graduated from High School in West Point, MS in 1965. He attended MSU until he joined the MS National Guard in 1966, earning the rank of Staff Sergeant. Ray was employed by Babcock & Wilcox in West Point as a boiler maker for 30 years. At B&W he was elected Union Steward for Boiler Maker Local 903 and served on the credit union board there. He was an enthusiastic MSU Bulldog fan and was best known at the Columbus Farmers Market for his heirloom tomatoes. In Hendersonville TN, Ray served on the board of trustees at Good Shepherd United Methodist Church. He was an active member, giving his time as a volunteer for the food pantry, “Feed the Need”, and “Room in the Inn”. Ray was actively involved in his community and neighborhood, serving several years on the Glen Oaks HOA board. Ray was preceded in death by his parents and son, Terrell Hamilton. He is survived by his wife of 32 years, Carolyn Terrell Hamilton; sons, William Hamilton, James Hamilton, Chris Terrell; and brother, Wade Hamilton. Ray had 3 grandchildren, Forrest Hamilton, Hudson Hamilton, and granddaughter, Madison Terrell; and 2 great-grandchildren, Zaiden and Austin. A Celebration of Life Memorial Service will be held in Hendersonville, TN at Good Shepherd United Methodist Church on Saturday, February 22 at 11:00 a.m. His family will receive friends from 10:00 a.m. until 11:00 a.m. at the church. Interment was at Friendship Cemetery in Columbus, MS. Graveside services in MS were handled by Memorial Gunter Peel Funeral Home, 716 2nd Ave N, Columbus, MS 39701. The family has entrusted local services to Austin & Bell Funeral Home and Cremation Service, 104 Sanders Ferry Road, Hendersonville, TN. 615-822-4442.

Alvin Ray Hamilton passed away on February 5, 2020 in Nashville, TN. Born on July 2, 1947 to Lera Bailey Hamilton and James Ivy Hamilton in Cumberland, MS. He was a long-time resident of Mississippi before moving to the Nashville, TN area.... View Obituary & Service Information

The family of Alvin "Ray" Hamilton created this Life Tributes page to make it easy to share your memories.

Alvin Ray Hamilton passed away on February 5, 2020 in Nashville,...

Send flowers to the Hamilton family.