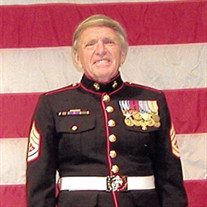 Billy G. DeVasher, age 93 of Hendersonville, was welcomed by the Lord into his Heavenly home on September 23, 2021. He finished his incredible life strongly after a short battle with COVID-19 and now has joined the love of his life for seventy-seven years, Dorothy “Dot” DeVasher. He was a healthy, active, and productive ninety-three year old who exercised at First Baptist Family Ministry Center on a daily basis, in addition to his afternoon neighborhood walks. Billy was a wise and valued mentor to his family and friends and had a curiosity and love for all people throughout his life. He was greatly cherished as a husband, father, grandfather, great-grand-father, and friend to all. Billy was born on January 18th, 1928 at home in Gallatin, Tennessee, to Annie and Gene DeVasher, who he described as hard-working and God-loving parents. Growing up in the Depression, he worked on the family farm alongside his dad and brothers to help support the family. He played football at Portland High School and thought that was his reason for being. However, he was faced with a difficult decision, as he was very patriotic and wanted to see more of the world. He had an ever-present dream to become a United States Marine fighting in the Pacific, and at the age of seventeen, he decided that was his destiny. He served admirably in two wars: World War II and the Korean War. He served three different tours in the Marine Corps, from 1945 through 1952. He fought in the battle at Chosin Reservoir, one of the most prominent battles in the Korean War. Fighting in knee-deep snow in minus 40-degree weather, he fought in the worst of the Fox Hill battle, with fewer than 30 of the 240 Fox Company men surviving. In Washington D.C. on June 7th, 2000, Billy was presented the Silver Star Award by the Commandant of the United States Marine Corps for his brave service in the Korean War. His Colonel described his defense as “epic courage… to go down beside the proudest and most honored deeds of our nation’s wars”. When he arrived home from Korea, he hugged his parents, set his seabags down, and headed straight to south Mississippi to see Dot. Shortly after, they were wed December 20, 1952. Together, Billy and Dot had three children: Terry, Al, and Jan. In 1954, he attended the Billy Graham Crusade, where he dedicated his life to Christ. He had a fifty-five year career serving as a pastor in Baptist churches throughout several states, as well as a multitude of other careers which included being a commodity trader, Marine Corps recruiter, author, teacher, counselor, coach, and real estate developer. Billy was a life-long learner. His college career consisted of attending UT Martin, The University of Kentucky, where he played football under Bear Bryant, Belmont College, where he earned his Bachelor of Science degree, and Vanderbilt-Peabody, where he earned his Master’s Degree in both religion and psychology and a Specialist in Education Degree. He also received his Doctorate of Theology from Luther Rice Seminary. Anyone who had the opportunity to know Billy knew he was a man of God who loved to serve others. Billy was a longtime member of First Baptist Church Hendersonville where he was active in the Men’s Fraternity and Wednesday Morning Bible Study. He was a charismatic, fun-loving, and adventurous man who finished the course strong, surrounded by his loved ones. Billy is preceded in death by his parents, Gene and Annie DeVasher, his brothers, Dave (Ree) and Joe (Jean), his wife, Dorothy DeVasher, and his son, Al DeVasher (Charlotte). He is survived by his daughters, Terry Darnell (Randy) and Jan Kolb (Jeff), and his six grandchildren: Ryan Darnell (Amy), Alexandria Melton (Brian), Carley DeVasher, Madeline Kolb, Noah DeVasher, and Allie Kolb; and five great-grandchildren: Ella Jane and Brock Melton, and Sterling, Declan, and Josephine Darnell. A Celebration of Billy’s Life will be held on Wednesday, September 29, 2021 at 1:00 P.M. from First Baptist Church Hendersonville. Interment will follow in Maple Hill Cemetery in Portland, TN. Visitation with the family will be on Wednesday from 11:00 A.M. until time of service. Active Pallbearers will be Ryan Darnell, Randy Darnell, Brian Melton, Jeff Kolb, Tony DeVasher, and Chuck Allen. Honorary Pallbearers will be the Men’s Fraternity and Wednesday Morning Bible Study Group from First Baptist Hendersonville. Arrangements Entrusted To: Sumner Funeral & Cremation, Gallatin (615)452-9059 www.sumnerfuneral.com

Billy G. DeVasher, age 93 of Hendersonville, was welcomed by the Lord into his Heavenly home on September 23, 2021. He finished his incredible life strongly after a short battle with COVID-19 and now has joined the love of his life for seventy-seven... View Obituary & Service Information

The family of Billy G. DeVasher created this Life Tributes page to make it easy to share your memories.

Billy G. DeVasher, age 93 of Hendersonville, was welcomed by...

Send flowers to the DeVasher family.