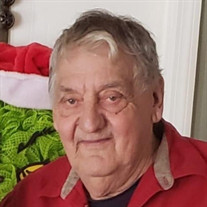 Bobby Joe "Daddy Bob" Hayes, Sr., age 76 of Gallatin, passed away suddenly February 8, 2021 at his home. Mr. Hayes was born at home in Lebanon, Tennessee on October 3, 1944 to the late James Thomas Hayes and the late Katherine Green Hayes. Bobby was a hard worker; he was a brick & block mason for most of his life up until his passing. He was loved by everybody, always provided for his family and loved to help people in need. In addition to his parents, he was preceded in death by his daughter, Deborah Robertson; siblings, Francis “Tootsie” Hayes, Charlene Lannom, Billy Hayes, and Tommy Hayes. He is survived by his children, Rhonda Clemons (Jerry), Pamela Hayes, Troy Morrison, and Bobby Hayes, Jr. (Dawn); 17 grandchildren; 19 great-grandchildren; siblings, Tommie Jones (Charles), Wayne Hayes (Valerie), Shirley Agee, and James Hayes; he is also survived by his many nieces and nephews. A Celebration of Life honoring Bobby will be held on Saturday, February 27, 2021 at 1:00 P.M. from The Lord’s Sanctuary Church, 734 Red River Road, Gallatin. Visitation with the family will be on Saturday, February 27th from 11:00 A.M. until time of service. Arrangements Entrusted To: Sumner Funeral & Cremation, Gallatin (615)452-9059 www.sumnerfuneral.com

The family of Bobby Joe "Daddy Bob" Hayes, Sr. created this Life Tributes page to make it easy to share your memories.

Send flowers to the Hayes family.