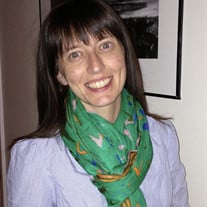 Carley Farley Meade (September 14, 1976 - February 21, 2020) died at Alive Hospice 6 1/2 years after being diagnosed with colorectal cancer. Born in Beckley, WV, she lived in Nashville since the 1980s. She is survived by her husband Jonathan Meade; parents Patricia (Woolwine) & Charles Farley; siblings Tina Hall, Beth Ochsenbein, ‪Bonnie Brown, Neisa Farley, Tony Brown, & Tim Farley; as well as many other relatives. Although she had no biological children, Carley had lots of ”kids” - she was a nanny for nearly 20 years, caring for 28 children from 16 different families. Many of those families described her as Mary Poppins because of her amazing, intuitive abilities with children. Carley never considered nannying a “job”. Rather, she felt like she was tricking families into letting her play with their kids for the day and then paying her for that favor. One father remarked, “I have never seen anyone who is better at what they do than Carley was as a nanny.” She was kind-hearted, goofy, quirky, brutally honest, playful, and always ready for a laugh. She had a passionate zest for life and lived it fully – truly a shining light. Despite her struggles with cancer, she and Jon kept a busy social calendar attending music shows, Broadway plays, ballet, movies, sporting events, and local plays starring her “kids”. She was an outgoing people person, would introduce herself to anyone, and make them feel special. She loved to dance and would often be the first one on a dance floor. During her 20‘s, Carley played a lot of ultimate frisbee, traveling with a women’s team all over the southeast and making life-long friends. That’s also where she met her husband, Jon, in 1998. Together, they loved to travel to new places, especially to National Parks, and enjoyed the healing power of nature. Carley was an expert at thrifting and has a huge collection of thrifted clothes, especially vintage dresses. She delighted in finding just the right outfit for friends and family members or for a fun costume. A small private natural burial was held March 1 at Larkspur Conservation (https://www.larkspurconservation.org). She is forever in nature at the edge of the woods overlooking a beautiful meadow. There will be a colorful celebration of life party (Carley-approved attire) in Nashville when possible. If you would like to attend, contact Jon. In lieu of flowers, Carley would much prefer donations to be made to Gilda’s Club Middle Tennessee (free cancer support clubhouse for anyone impacted by cancer, https://www.gildasclubmiddletn.org/ways-to-give/donate/, ‪615-329-1124) or Alive Hospice (https://www.alivehospice.org/donate, ‪615-327-1085). Both organizations have been important parts of her life.

Carley Farley Meade (September 14, 1976 - February 21, 2020) died at Alive Hospice 6 1/2 years after being diagnosed with colorectal cancer. Born in Beckley, WV, she lived in Nashville since the 1980s. She is survived by her husband Jonathan... View Obituary & Service Information

The family of Carley Farley Meade created this Life Tributes page to make it easy to share your memories.

Send flowers to the Meade family.