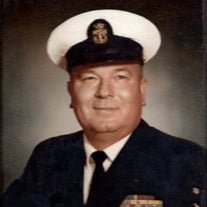 Charles Taylor, MCPO, US Navy (Ret.) Charles Taylor passed away on December 4, 2017 from complications attributed to Alzheimer’s disease.Mr. Taylor was born in Gainesboro, Tennessee on March 17th, 1927.He was the oldest son of the late Benjamin and Willimena McCawley Taylor of White House, Tennessee. He attended schools in Gainesboro, White House, and Gallatin, Tennessee during his youth, and joined the US Navy during World War II.After completing boot camp and special operations training was sent to the South Pacific.He spent 2 year in the South Pacific and was heavily involved in the fighting that captured the island of Peleliu in 1944. He was trained as a Navy “Frogman” which was the precursor to the Navy Seals that we all know of today.His primary duties during the war were to infiltrate the enemy ship harbors and provide protection and assist the Underwater Demolition Teams to set charges that made the harbors unusable and to sink enemy ships in those harbors. As a member of the “Greatest Generation” he remained in the Navy until his retirement in 1972.He served tours all over the world during his career to include Bremerton, Washington; San Diego, California; Elizabeth City, North Carolina; Norfolk, VA; Washington, DC; Guantanamo Bay, Cuba; and Newport, Rhode Island. and eventually settled in Gallatin where he worked at the Sumner Regional Hospital as the Food Service Manager until his retirement in 1998. He was always a strong, quiet man who never spoke in a negative manner when dealing with others. His matter of fact style was one of his most admiring traits respected by those who knew and loved him. He leaves behind his wife of 63 years Wilma (Oldham) Taylor, his sister Polly (Taylor) Lambert, his sons Rick and Ron Taylor, his daughter in laws Joanie and Shirley Taylor, sister-in-laws, Katherine Taylor, Bonnie Taylor and Faye Taylor, his grandchildren Dennis, Bryan, Austin, and Aaron Taylor, Amy (Taylor) Renshaw, his great-grandchildren Julia, Jenna and Aidan Taylor, and Presley Renshaw. He was pre-deceased by his brothers Austin, Morris, and William Taylor and his sister Jean Garrett. In lieu of flowers, donations to the Alzheimer’s Association or the Sumner County Animal Control may be made in his name. Funeral services will be on Thursday, December 7, 2017 at Gallatin First Baptist Church, 205 E Main St in Gallatin beginning at 2 PM with Pastor John Penfield officiating. Entombment will follow in Sumner Memorial Gardens. Visitation will be on Wednesday, December 6, 2017, 3-7 pm and again on Thursday from 1-2 pm. Alzheimer's Association Sumner County Animal Control

Charles Taylor, MCPO, US Navy (Ret.) Charles Taylor passed away on December 4, 2017 from complications attributed to Alzheimer&#8217;s disease.Mr. Taylor was born in Gainesboro, Tennessee on March 17th, 1927.He was the oldest son of the late... View Obituary & Service Information

The family of Charles Bryan Taylor created this Life Tributes page to make it easy to share your memories.