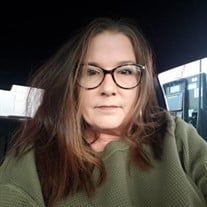 Christy Casebolt June 10th, 1969 - April 24th, 2022 Christy was born in Amarillo, Texas on June 10th, 1969. She passed away in Hendersonville, TN, on April 24th, 2022, surrounded by her daughters, who were her greatest love. She loved her two daughters, Chelsea and Alexx, more than anything. No one was more proud of them than her. Together, they were the absolute amazing trio of love and support. That support extended to Chelsea and Alexx’s friends, who she treated like they were her own kids. She loved the Nashville Predators and her large "hockey family" of wonderful friends that brought her so much happiness. She was a member of Faith Lutheran Church, LCMS in Tullahoma, TN. Survived by daughters Chelsea (Ayden) Hulen (Dallas, TX) and Alexandra "Alexx" Casebolt (Nashville, TN), mother Carole Hulen, father Roger (Sylvia) Hulen, sister Cindy O'Neal, half brother William Hulen, all of Amarillo, TX. She was very fond of her precious nieces, Gabi Grace O'Neal and Karissa Padilla. Nephews Tyler (Delena) Dinwiddie, Kelby Casebolt, Julian Padilla, Brenden Padilla, Roman Padilla, and "forever" niece Valorie Salsman. Her great niece and nephews had her heart from the moment they were born: Addison Dinwiddie, Kaden Casebolt, Aziah and Ace Padilla. She also leaves behind Eric Casebolt. She was preceded in death by her most beloved Nanny, Albina Grace York, in 2006, and her oldest nephew, Tim Dinwiddie, in 2000. Donations can be made in Christy’s memory to the Nashville Predators Hockey Foundation or Nashville Human Rights campaign. Arrangements Entrusted To: Sumner Funeral & Cremation, Gallatin. 128A W. Eastland Ave,. Gallatin, TN. 615-452-9059. www.sumnerfuneral.com

The family of Christy Casebolt created this Life Tributes page to make it easy to share your memories.

Send flowers to the Casebolt family.