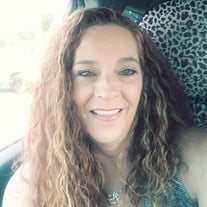 Cinda Gail Kirby, age 54, of Hendersonville, Tennessee, passed away on October 25th, 2021. She was born on August 28, 1967 in Nashville, Tennessee to Larry McFadden and the late Gail McFadden. In addition to her mother, Cinda is also preceded in death by her husband, Donnie Kirby. Cinda is survived by her father, Larry McFadden; brother, Jerry McFadden; uncles, Frank Checchia and Lenny Checchia; aunts, Maria Barbieri and Bunny Checchia; sons, Michael (Amee) Lewis and Daniel McFadden and his fiancé Tiffany Ryle; grandchildren, Quinncy and Quest Lewis and Harper, Emerson, and Malachi McFadden; best friends, Kimberly Brown, Renee Price, and Mary Preston. Cinda was a very outgoing and loving person. She was always very high energy and just a joy to be around. She loved being the life of the party and never cared what others thought about her. Cinda had a heart of gold and would do anything for anyone. She loved being outdoors whether it be working in the garden, tending to her flowers, riding motorcycles, riding horses, fishing, etc., if it was an outdoor activity she would more than likely enjoy it. Cinda took great pride in being a mother and grandmother. She loved being the “Team Mom” and attending her kids sporting events when possible. She absolutely loved watching football games on Friday nights! All of her grandkids meant the world to her and she would have done anything in the world for them. The grandbabies held a very special place in her heart. Cinda was a very kind and sweet spirited daughter, mother, grandmother, friend, and woman. Cinda was loved by many and will be terribly missed. May she rest in peace. Arrangements Entrusted To: Sumner Funeral & Cremation, 615-452-9059, 128A W. Eastland Ave., Gallatin, TN 37066. Condolences may be shared via the online guestbook via www.sumnerfuneral.com

Cinda Gail Kirby, age 54, of Hendersonville, Tennessee, passed away on October 25th, 2021. She was born on August 28, 1967 in Nashville, Tennessee to Larry McFadden and the late Gail McFadden. In addition to her mother, Cinda is also preceded... View Obituary & Service Information

The family of Cinda Gail Kirby created this Life Tributes page to make it easy to share your memories.

Send flowers to the Kirby family.