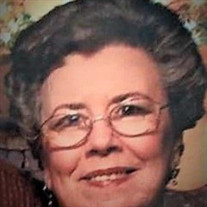 Clara Frances Newbill, age 89 of Nashville and formerly of Knoxville, TN, passed away August 19, 2020. Mrs. Newbill was born on November 15, 1930 in Jackson, Tennessee to the late Herman and Opal Creasy. Born and raised in Jackson, TN, Fran graduated from Steele High School, Jackson, TN where she excelled as an avid piano player and had a beautiful soprano voice. Fran later married Lemial James Newbill on September 2, 1949 and moved to Stockton, CA while Jim served in the Navy; she worked as an office assistant in a construction company and had her first child (Mike) there. Following Jim’s military service, they moved to Knoxville, TN where their second son (Matt) was born. They lived there until 2019. After raising her two boys, Fran went to work for the University of Tennessee in the Graduate Assistant’s office. Beginning as office support Fran’s personality, skill, and knowledge helped hundreds as they were preparing their final Thesis’ and Dissertations’. Fran was a significant part of the West End Church of Christ where she taught young children, served many of the elderly of the congregation, was known as the most amazing cook which led to the favorite desserts at the Church Pot Lucks. Fran and Jim made a ministry of helping young couples from church as they came to the University of Tennessee, opening their home as a place to lessen home sickness and provide great meals; she was always known as someone who was comfortable talking to anyone and made them feel special and loved. After her retirement, Fran focused on helping others at West End Church of Christ and supporting her husband who served as an Elder. Fran took a lead in their local subdivision, Timbercrest, as they prepared the building of the subdivision pool and led in the development of many pool activities for all the members. In addition to her parents, she was preceded in death by her brother, Fred Creasy; sister, June Woodson (William); and sister-in-law, Reba Benjamin. She is survived by her husband of 71 years, Lemial James Newbill (Jim); sons, James Michael “Mike” Newbill (Rosemary), Matthew Creasy “Matt” Newbill (Teresa); grandchildren, Matthew Britten Newbill (Emilie), Hannah Newbill, Mindy Michelle Weatherford (Levi), Kristin Beth Sessions (David); great-grandchildren, Levi Austin and James Peyton Weatherford, Cale Thomas and Clara Mae Sessions, Lumie Love Newbill; sister-in-law, June Reaves Creasy; nieces and nephews, Melissa Woodson, Bill Woodson, Allison McKamey, John Creasy, Cristine Liimatta, Pam Newbill, Ginger Newbill, and Linda Baldwin. Fran has chosen Cremation and will be buried, in the future, with her husband of 71 years for eternity. In Lieu of Flowers donations to The Missions Fund at West End Church of Christ, 8301 E. Walker Springs Lane, Knoxville, TN 37923. Arrangements Entrusted To: Sumner Funeral & Cremation, Gallatin (615)452-9059 www.sumnerfuneral.com

The family of Clara Frances Newbill created this Life Tributes page to make it easy to share your memories.

Clara Frances Newbill, age 89 of Nashville and formerly of Knoxville,...

Send flowers to the Newbill family.