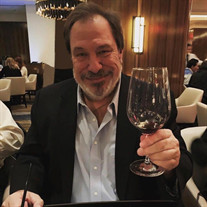 David "Kent" Lindahl, age 66 of Nashville, passed away July 15, 2020. Kent was born on December 30, 1953 in Nashville, Tennessee to the late John Robert Lindahl and the late Jane Sumner Lindahl. A lifelong resident of the Nashville area, Kent was raised in Ashland City and graduated from Cheatham County High School where he played football. Kent worked for several years alongside his brother and father at their family business, State Industries. He enjoyed living both in Nashville and Sarasota, Florida for the past several years, and enjoyed traveling with his family to Exuma in the Bahamas to vacation and watch the Regatta. He loved his family and friends dearly and always made sure everyone around him had a good time. Kent was an extravagant person who always wanted to make sure everyone had the best of everything, his family will miss him dearly. Kent is survived by his daughter, Krista Lindahl Alford (Chance); grandchildren, William Grayson Alford; life partner, Victoria Vaudrey; sister, Sherry Lindahl Lewis; brother, John Robert Lindahl, Jr. (Alice); nephews, John Robert Lindahl, III, Patrick Lindahl (Christina), Hank Lindahl (Kristy), Todd Lindahl (Natasha), and John Lewis (Rebecca); niece, Lesli Oliver Wright (Steve); and several extended family members and friends. In accordance with his wishes, Kent will be cremated and his remains will be laid to rest next to his mother in Spring Hill Cemetery in Nashville. A celebration of Kent's life will be announced at a later date. In lieu of flowers, please make memorial donations to The Exuma Foundation at exumafoundation.org. Arrangements Entrusted To: Sumner Funeral & Cremation, Gallatin, (615)452-9059 www.sumnerfuneral.com

The family of David Kent Lindahl created this Life Tributes page to make it easy to share your memories.

Send flowers to the Lindahl family.