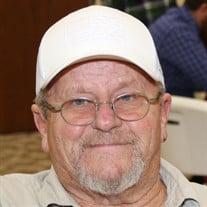 Dennis Eugene Lawhorn, 73 of Crossville, Tennessee, formerly of Neoga, Illinois, passed away peacefully on September 1, 2021 at 1:07 a.m. at the VA hospital in Nashville, TN. Born in Mattoon IL., on May 23, 1948 to the late Glen Sr. and Catherine (Bolen) Lawhorn. He married his beloved wife, Brenda (Lambrecht) Lawhorn, on June 6, 1997. In addition to his parents, Dennis was preceded in death by his dear friends, Charles Otis Bradfute and Bill and Avanelle Fiscus. He is survived by his wife Brenda; His children, Dane (Kelley) Lawhorn, of Oakley, Illinois, Dakota (Jenny) Lawhorn, of Lerna, Illinois, Jason Lambrecht, of Corpus Christi, Texas, Jessica (Zachary) Moore, of Cookville, Tennessee, Joey (Miranda) Wilson, of Casey, Illinois; Grandchildren, Chase, Lex, Rider, Lexus Lawhorn, Carmen and Timberly Lawhorn, Julianne Lambrecht, Natasha Smeader, Sophia Archibald, Eli Moore, Zailynn LaBaume, Anthony Reyes, Catalina Wilson, Abel and Cooper Wilson; Brothers, Glen Lawhorn Jr., Steve (Irene) Lawhorn, of Mattoon, Illinois; Sisters, Jerri (Paul) Aleshire, of Mattoon, Illinois, Donna (Ronnie) Flake, of Neoga, Illinois, Peggy (Lyle Gray) Adams, of Lakewood, Illinois. Denny served honorably in the United States Army during the Vietnam War. After leaving the military he became a diesel tech. Denny was a very adventurous person and loved traveling, which led him to seek employment driving a semi truck. He worked for Phil Hershberger at HH Transportation Service LLC of Arthur, Illinois, where he retired. Denny enjoyed tinkering around with things in his shed and little projects his kids and grandkids would like for him to do. He could build and fix just about anything. He was definitely a jack of all trades. He enjoyed spending quality time with his family and most importantly his grandchildren. Denny was always a story teller. Some were true, some were a bit exaggerated but he could always make people laugh. He will always be remembered for his quick wit and wonderful sense of humor and contagious laugh. A Celebration of life will be held on September 18, 2021 at VFW in Mattoon Illinois from 3:30PM until 6:00PM. Cremation Rites were accorded per Denny’s wishes. Arrangements Entrusted to: Sumner Funeral & Cremation, Gallatin, TN.

Dennis Eugene Lawhorn, 73 of Crossville, Tennessee, formerly of Neoga, Illinois, passed away peacefully on September 1, 2021 at 1:07 a.m. at the VA hospital in Nashville, TN. Born in Mattoon IL., on May 23, 1948 to the late Glen Sr. and Catherine... View Obituary & Service Information

The family of Dennis Eugene Lawhorn created this Life Tributes page to make it easy to share your memories.

Send flowers to the Lawhorn family.