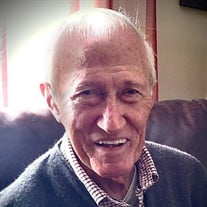 Donald H. Gregory, age 92, of Hendersonville, TN passed away Monday, March 22, 2021. He is survived by his wife of 67 years, Peggy Gregory (Hunt); sons, Steve and David; daughter-in-law, Linda; five grandchildren, Emily Wicke (Andy), Melissa Baker (Brad), Ellen Smithmier (Kenny), Becky Chastain (Kelly), and Sarah Tarpley (Trey); and seven great grandchildren. He is also survived by one half brother, Don Kelly. He is preceded in death by one daughter-in-law, Joy. Don was a native of Nashville being born in 1928 at home on 3rd Avenue North and raised on Joseph Avenue in East Nashville. He was the only son of Eagon and Floris Gregory. He attended Nashville public schools and was a 1948 graduate of East High School. Don was a veteran of the United States Army serving during the Korean War. In 1953, he and Peggy were married at Jackson Park Church of Christ. He worked for AT&T for 34 years at their office in downtown Nashville. He was a member of the Goodlettsville Church of Christ. Above all, he loved God, his wife, and his family. Don was a man of servitude, patience, and perseverance. He sought to create a safe, secure and loving home for his family which has been passed down 3 generations. During his life he served as a church deacon, a song leader, and a Bible teacher. His patience was best displayed in the time spent repairing anything broken or discarded in his workshop. He will be remembered by his family for his time spent playing guitar (mainly Chet Atkins songs), teaching his kids and grandkids how to swim, and reading or reciting stories to his grandchildren and great grandchildren. He was a lifelong learner teaching himself the electric slide for his granddaughter’s wedding at 79, attending his first college class at age 81, and teaching neighborhood kids how to build and fly kites at age 84. His outlook on life and life after death is best captured in his favorite poem “When Earth's Last Picture Is Painted" https://allpoetry.com/When-Earth's-Last-Picture-Is-Painted by Rudyard Kipling, which he would read, recite, and revisit throughout his life. In lieu of flowers, donations can be made to Churches of Christ Disaster Relief. https://www.disasterreliefeffort.org/ Don’s wishes were to have no funeral ceremony. You may offer your condolences online at www.austinandbell.com Services have been entrusted to Austin & Bell Funeral Home and Cremation Service, Hendersonville. 615-822-4442.

The family of Donald Herbert Gregory created this Life Tributes page to make it easy to share your memories.

Send flowers to the Gregory family.