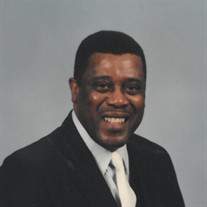 Earl William Hall, age 84, passed away June 17, 2020 in Gallatin, Tennessee. Mr. Hall was born on September 6, 1935 in Gallatin, TN to the late Walter Hall and Vassie Johnson Hall Smith. Earl was born and raised in Gallatin, still residing in the house he was born in up until his health allowed. Earl was the youngest of three children born in Gallatin, TN. He lived with his grandmother, Isabelle (Belle) Johnson all his life until her death in 1967. After graduation from Union High School in 1953, he attended Mississippi Vocational College on a full basketball scholarship. In 1955 he joined the United States Navy and served until 1958. In 1960 he attended Tennessee State University, completing his major in Elementary Education. After college he taught school in Gallatin for 11 years, working mainly with children who had various problems in school and at home. In 1974, while still teaching, he began a career in Law Enforcement with the Sumner County Sheriff's Office as the first African-American Certified Sheriff's Deputy in Sumner County. In 1977, he transferred to the Gallatin Police Department, where he served until 2004, retiring at the rank of Lieutenant with 30 years in Law Enforcement. In addition to his parents, he was preceded in death by his brother, John Robert Hall; sister, Emma Mai Dowell; aunt and uncle, Irene and Joseph Coakley; and aunt Jennie Flippen. He is survived by his loving wife of 33 years, Loretta Teal Hall; daughters, Teris Clay, Sherree Crowder (Nathan), and Tammy Hinsley (Marvin); grandchildren, William Douglas (Toshua), Sadetra Douglas, Amanda Stanley (R.J.), Matthew Carney (Hayley), Kenneth Zane (Morgan), Robert Teal; and many great-grandchildren; nieces and nephews, Anna Bell Elliott (Sammy), Bobby Dowell, John William Dowell (Audrey), James Edward Dowell (Jackie), Patricia Earlene Bright (Chris), Theresa Fuqua (Doug), and Anthony Dowell Blakemore. There will be a Celebration of Life honoring Earl held at a later date. The family would like to extend their gratitude to the nurses, techs and staff at Gallatin Center for Rehab and Healing for their wonderful care of Earl over the past 6 years. Arrangements Entrusted To: Sumner Funeral & Cremation, Gallatin Phone: (615)452-9059, Obituary Line: (615)675-5193 www.sumnerfuneral.c

The family of Earl W. Hall created this Life Tributes page to make it easy to share your memories.

Send flowers to the Hall family.