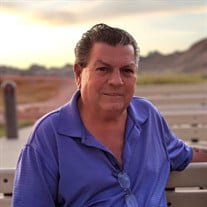 Edward Anderson, age 69 of Hendersonville, passed away peacefully February 24, 2021 at his home. Ed was born on March 12, 1951 in Danbury, Connecticut. Ed Joined the Navy in 1969 and served on the cruiser USS Canberra in the Vietnam War; he earned his black belt in Karate at the age of 52 and those skills saved his life on one memorable occasion while working out of town. He and his family lived in Walton, NY for 20 years where he was involved in his local teamster’s union. He was a construction superintendent for Retail Builders where he developed many lifelong friends and work associates. Ed had a no-nonsense work ethic and was sometimes hard to work for but once you got through that tough exterior you had a friend for life. He never forgot a face or name no matter how many years had gone by. Over the last 10 years, Ed’s most treasured role, which he refused to relinquish to anyone else, was Runner Support. He traveled all over the country with his family and close friends who ran marathons and half marathons. Ed was present for every race cheering everyone on and providing the post-race recovery drinks and food. During the cold runs, he kept the race wagon warm for our return. For every major training run, Ed was there right on time with water, Gatorade, oranges, or power bars. He was ALWAYS there when you needed him. Ed overcame much to create a stable life in which to raise a successful, healthy and loving family with Crystal. This was no small feat. His family will forever be thankful and proud of all his hard work and the example he set. He will be deeply missed. Ed was preceded in death by his mother. Virginia; sisters, Ruth and Pauline; and granddaughter, Ashlyn McGehee. He is survived by his wife and love of his life of 45 years, Crystal Wright Anderson; his two beautiful children, Christina Underhill (Tod) and Amber Anderson; grandchildren, Ethan and Erin Underhill; nieces and nephew to whom he was a father figure, Marlon Roger Wright, Tia Bottum and Kimberly Hawley; sisters, Barbara Frye (Don), Debbie Hare (Brooks), Harriet Rosenthal; and many nieces and nephews. In lieu of flowers, donations can be made to SOS (saveoursetters.org), Walden’s Puddle (waldenspuddle.org) or your favorite animal rescue. Ed, the eight bells have sounded for your end of watch, we’ll take it from here. Arrangements Entrusted To: Sumner Funeral & Cremation, Gallatin (615)452-9059 www.sumnerfuneral.com

Edward Anderson, age 69 of Hendersonville, passed away peacefully February 24, 2021 at his home. Ed was born on March 12, 1951 in Danbury, Connecticut. Ed Joined the Navy in 1969 and served on the cruiser USS Canberra in the Vietnam War;... View Obituary & Service Information

The family of Edward Anderson created this Life Tributes page to make it easy to share your memories.

Send flowers to the Anderson family.