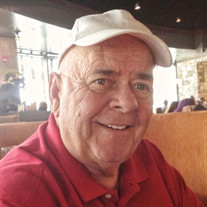 Mr. Gene Nethery, 81, went peacefully to be with the Lord on Friday, August 6, 2021. Gene was born on November 6, 1939 in Dallas, TX and grew up in Salt Lake City. He was predeceased by his parents Eugenia Kathleen Barnes Nethery of Paris, TX and William Bedford “Bill” Nethery of Cisco, TX. B. Eugene “Gene” Nethery, also lovingly known as Dad, Pappy and Dear, had a strong work ethic, an adventurous spirit and a smile that would light up any room. He had a special love for his mother and Granny, and doted on his ever-present dogs throughout his life, especially Penny, Lady and Duke. At the age of 13 and before eligible for a driver’s license, he obtained his pilot’s license by paying for lessons in exchange for cleaning small planes at the private sector of the Salt Lake City airport. He then borrowed money and used it to open a small local gas station named “Gentleman Gene’s” that offered white glove service, all the while unbeknownst to his parents until they stopped for gas and saw their young son there. During his lifetime, his love for flying would lead him to many jobs, adventures and owning various personal aircraft, including his acrobatic “32Papa,” single and twin engine Beechcrafts, a Piper, and Cessnas. His dad instilled in him an abiding love of hunting and fishing. Throughout the years he would enjoy pheasant, dove, deer, elk and antelope hunts. He loved to fly his dad to Lake LaRonge, Saskatchewan on their annual fishing and camping trips. He was also quite a deep sea fishing enthusiast. He loved the sea and would buy and sell boats, from fishing boats to speed boats to yachts. He also was fond of motorcycles and especially antique cars and trucks. His most beloved was the ‘55 Thunderbird, with the ’36 Plymouth a distant second. He had a confident manner and traveled the world in his younger years. He enjoyed taking the family on RV trips throughout the Rocky Mountains and western deserts, usually with dirt bikes in tow, boating excursions to Lake Powell for sun filled days of fun aboard “Stinky,” open water trips on “Wave Dancer,” and unforgettable ski trips and plane rides. He was a true entrepreneur. One of his favorite ventures included creating and running a pilot training program for the Air Force in Colorado Springs teaching pilots to fly and land planes and gliders for paratroop missions at the Academy, as well as fulfilling other Air Force flying operations. Prior to that he sold planes through Kensair and went on to develop their A&P certification aircraft mechanic school. He was a real estate broker in Denver, created “The Mane” men’s hair styling salon, and sold Winnebagos in Denver, CO. He was a ski instructor and served on volunteer ski rescue patrol. He was CEO of “Top of the Nation Aviation” in Littleton, CO and ran the Jefferson Airport near Arvada, CO. He co-owned “Beefalo” out of Sacramento, CA. He also developed “Check Rite,” one of the Nation’s first check guarantee companies. It would go on to merge into Data Broadcasting, New York City. In his later years he called Florida and Tennessee home. You could often find him reading periodicals regarding the sales of his life-long interests- planes, boats, guns and automobiles. Whether he was in the market to purchase or trade one of his acquisitions, he loved to read and study the industries. Gene is survived by his loving wife of 23 years and best friend, Rose Nethery; son Scott Romney of UT; daughter Tammy Foote of UT; daughter Kathleen Nethery of VA; son Ben Nethery of NV; daughter Shelley Gagnon of CA; sister Mary Lou Hanson and family of UT; and numerous grandchildren and great-grandchildren. In accordance with his wishes, Gene will be cremated. Family will inter his ashes in Utah next to his beloved parents. He cherished his family. He loved lightning storms and especially sunsets. He looked on the sunny side of life, and always said the family prayer before family meals. Most of all he loved good food, good drinks, good friends and good jokes. He will be deeply missed by those he left behind. He was a true gentleman, a beloved Dad, a mighty man and now our guardian angel.

Mr. Gene Nethery, 81, went peacefully to be with the Lord on Friday, August 6, 2021. Gene was born on November 6, 1939 in Dallas, TX and grew up in Salt Lake City. He was predeceased by his parents Eugenia Kathleen Barnes Nethery of Paris,... View Obituary & Service Information

The family of Gene Nethery created this Life Tributes page to make it easy to share your memories.

Send flowers to the Nethery family.