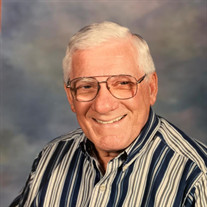 Herman “Moe” Moore age 85 of Gallatin and formerly of Hendersonville, passed away on December 11, 2020. He was born on June 6, 1935 in Nashville, TN to Willie Moore and Annie Summers Moore Carlton. Mr. Moore attended East Nashville High school where he played football and was a member of the 1951 championship team. In 1957 he married Dorothy Jean Stephens, his wife of 63 years. He served in the Marine Corps Reserve and the Air National Guard. He was a long-time member of the Hendersonville Masonic Lodge, Al Menah Shrine Temple, and the Scottish Rite. He was a 32nd degree Mason and a member of the Shrine clown unit. He served on the Sumner County Election Commission and was chairman for several years. Along with his parents, he was preceded in death by his brother, W.C. Moore, and sister Helen Perere. He is survived by his wife, Dorothy Stephens Moore; daughters, Mitzi Daniels (Larry), Maria Moore, and Allison Johnson; grandchildren, Lee Daniels, Beth Henry, and Carli Daniels; and great-grandson, Ty Daniels. Visitation with the family will be held Saturday, March 20, 2021 from 2-5 P.M. at The Lord’s Sanctuary Church, 734 Red River Road, Gallatin, TN 37066. In Lieu of flowers, the family requested that donations be made in his name to Shriners Hospital for Children at shrinershospitalsforchildren.org. Arrangements Entrusted To: Sumner Funeral & Cremation, Gallatin, (615)452-9059 www.sumnerfuneral.com

The family of Herman "Moe" Moore created this Life Tributes page to make it easy to share your memories.

Herman “Moe” Moore age 85 of Gallatin and formerly of Hendersonville,...

Send flowers to the Moore family.