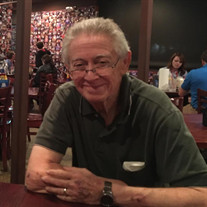 Horace Leslie Harper died peacefully July 20, 2021 after a courageous battle with Parkinson’s disease. Horace was born April 11, 1940 in Eagleville, TN to Doris L. and Beulah Vaughn Harper. He graduated from East High School in 1958 and never missed a day of school. Horace attended Belmont College and the University of Tennessee and graduated with an Accounting degree. During his long career, he worked as a Certified Public Accountant and he also worked in the hospitality industry for many years. Horace was also very athletic and played in several basketball leagues and was on a church bowling league. His love of sports translated into him coaching Little League basketball, baseball and soccer teams in which his beloved son played. Horace was preceded in death by his father, Doris and mother, Beulah, and his younger brother, Thomas S. Harper. Horace is survived by his beloved wife of 60 years, Janet Sue and his three children, Lynn (Roger) Stoll, Christi (Brandon) Brown and George (Stephanie) Harper and granddaughters Jessica and Hadlea Harper, Elizabeth and grandson Edwin Stoll and two step-grandchildren. The family will receive friends from 10:00am until time of Mr. Harper’s Celebration of Life Memorial Service at 12:00pm on Saturday, July 24, 2021 at Grace Church of the Nazarene, 2620 Pennington Bend Road, Nashville, TN 37214. In lieu of flowers, the family requests donations be made in his memory to Alive Hospice, 1718 Patterson Street, Nashville, TN 37203 or go to www.alivehospice.org You may offer your condolences online at www.austinandbell.com Services have been entrusted to Austin & Bell Funeral Home and Cremation Service, Hendersonville. 615-822-4442.

The family of Horace Leslie Harper created this Life Tributes page to make it easy to share your memories.

Send flowers to the Harper family.