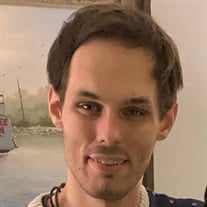 James Stone Carter was born in Nashville on March 1st, 1990. He died August 5, 2020 in Hendersonville, Tennessee. He is the son of James and Debbie Carter. Siblings include Grace and Shiannee Carter of Hendersonville, Tennessee and Aladeen Stoll of St. Louis, Missouri. Stone’s paternal grandparents are CB & Sally Carter of Portland, Tennessee. He has several aunts and uncles: David and Melissa Carter of Nashville, Aaron and Christy Carter of Portland, Craig and Gina Boyd of Fort Worth, Sheri Boyd of Tulsa, Jonathan and Esther Carpenter of Greenbrier, Great uncle and Great aunt Cal and Linda Vanloh of Portland, Oregon. Stone had many cousins as well. He is preceded in death by his maternal grandparents: Shirley and Donald C. Boyd of Dallas, Texas. He went by the name of “Stone” most of his life due to sharing the name of “James” with his dad, James Roy Carter. Stone was a spiritual man, not necessarily a religious man. He loved the Lord with all his heart. He always tried to do the right thing. If you were lucky enough to have known him, he was in your corner to the very end and it didn’t matter that you had been arguing with him an hour or a day ago - if you needed him, he was there. He was forgiving, always. He taught his family how to love unconditionally. He was known for his one-liners and his sense of humor. He loved taking pictures with a filter and sometimes without a filter. He was the family photo man. He captured many smiles, but the precious ones that he captured were of his sons, Damian and Ben Carter. He loved his boys as much as the stars, the moon, and the earth combined. He shared this love with his life partner, Karen Morales. They made a loving home in Springfield, Tennessee. He loved playing video games at his home. His favorite video game was Arkham Knight. His favorite super hero was Batman. He loved pizza and McDonalds! Stone was easy going for the most part. His big thing was that he didn’t like being alone. He loved people. When he didn’t have a friend, he went out and met a new one. We will definitely miss this loving and caring soul. Fly high Stoneboy! His family will receive friends from 4:00pm until 8:00pm on Monday, August 10 and again on Tuesday, August 11 from 11:00am until his Celebration of Life Service at 1:00pm at Austin and Bell Funeral Home, Hendersonville. Services will be conducted by Bobby Wilson. Pallbearers will include Tom Abair, Greg Benderman, Zander Morales, Michael Stovall, Ashton Taylor and Brian Morales. Interment will be in Beech Cemetery. The family requests that in lieu of flowers, memorial contributions be made to a Go Fund Me Fund that has been set up in his name. The funeral home asks that anyone attending the visitation to please wear a mask and refrain from any physical contact with the family such as hugs and handshakes. For your safety, all CDC guidelines are to be followed. Services have been entrusted to Austin and Bell Funeral Home and Cremation Service. 615-822-4442

The family of James Stone Carter created this Life Tributes page to make it easy to share your memories.

Send flowers to the Carter family.