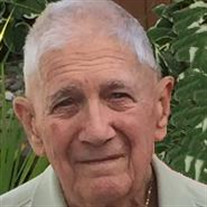 Remembering the Life Of James F. Driesch, Sr. April 2, 1923 - September 9, 2021 "No one you love is ever truly lost." - Ernest Hemingway James Francis Driesch, Sr. was born on April 2,1923 in Ambridge, Pennsylvania, northwest of Pittsburgh along the Ohio River and passed away in Gallatin, Tennessee on September 9, 2021, after spending many of his retirement years in the Myrtle Beach, South Carolina area. James was the youngest of five children born to August Driesch and Priscilla Arthurs Driesch, and was preceded in death by his older sister Jane Driesch Weber and three brothers, Carl, William, and John (Father Albert, TOR). He would spend his lifetime of 98 years surrounded by his loving family: his wife of 44 years (Dorothy Debacher Driesch), three children (Karen Driesch Sikora, James F. Driesch, Jr., and Mary Driesch), six grandchildren, twelve great-grandchildren and a host of close extended family and friends, especially including John Ciochetty and his immediate family. James proudly served his country during World War II as a Sargent in the Army Air Corps, the aerial warfare component of the United States Army. His service involved the landing at Normandy Beach and the liberation of Paris. In his later years, he was particularly proud to be seen in his WWII veterans cap on as many occasions as possible. Subsequent to his honorable discharge, James attended Slippery Rock College where he met and married the love of his life, Dorothy Marie Debacher. He also enhanced his education by getting his Masters Degree in Reading Education from the University of Pittsburgh. James and Dorothy settled down in Sewickley, Pennsylvania where he was a 7th grade English teacher in nearby Moon Township. As they raised their three children in the Sewickley community, they were active in many school and community events, including the AFS Foreign Exchange Student Association, the Quaker Valley HS Band Parents Association, and the Boy Scouts of America. After retirement, James and Dorothy moved to the Myrtle Beach, South Carolina area where they became active in square and round dancing, RV travel, as well as perfecting their skills in various crafting activities. After Dorothy's death, James formed strong ties with two fellow widowers, John Ciochetty and Robert Ripley. The gentlemen provided each other the support necessary to continue to live on their own into their later years and to travel together throughout four continents: Europe, Asia, South America, and extensively throughout North America. Following a long life well-lived, James succumbed to complications of the Covid-19 infection. The familiar saying that "family is where life begins and love never ends" certainly describes James's life. Both his extended and spiritual families have continued to grow and now we celebrate his life as one who we have once loved, but can never lose; for as we have loved him so deeply, he has become a part of us. The family of James F. Driesch, Sr. will hold a private memorial service in honor of his life and deep love of family and friends at a yet to-be-determined date. Arrangements entrusted to: Sumner Funeral & Cremation. 615-452-9059. Gallatin, Tennessee

Remembering the Life Of James F. Driesch, Sr. April 2, 1923 - September 9, 2021 "No one you love is ever truly lost." - Ernest Hemingway James Francis Driesch, Sr. was born on April 2,1923 in Ambridge, Pennsylvania, northwest of Pittsburgh along... View Obituary & Service Information

The family of James Francis Driesch Sr. created this Life Tributes page to make it easy to share your memories.

Send flowers to the Driesch family.