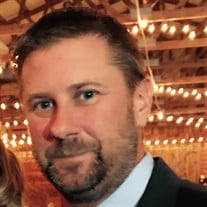 Jason Philip Prichard, 43, of Gallatin, Tennessee, passed into eternal life on Saturday July 27th, 2019 after a brief but valiant fight with cancer. Jason spent his final days surrounded by family and loved ones. Jason will be forever remembered by his wife and best friend, Amanda; son, Maddox (13); daughter, Brenna (10); and his parents, Philip and Vickie. Jason grew up in Harrison, TN and spent his childhood on Chickamauga lake where he developed a lifelong fondness for boating, golf, tennis, and the outdoors. Jason graduated from Central High School in 1994 and continued his education at Middle Tennessee State University. While at MTSU, Jason created lifetime friendships as a member of Kappa Sigma fraternity, and he graduated with a Bachelor of Science in Agriculture. Jason married his college sweetheart, Amanda, in 2001, and they proceeded to live a life filled with laughs, adventures, family, faith, and friends. In 2005 Jason and his father started Prichard’s Nursery Equipment, a local business that imports and sells industrial tree spades across the United States. Jason was a fiercely dedicated family man and loving husband who was actively engaged in the lives of his children. Jason loved to travel, wakeboard, golf, snow ski, and most importantly spend quality time with friends and family. Jason was a member of the Gallatin Country Club and Long Hollow Baptist Church. Jason was known for his warm and relaxing personality, his stoic temperament, his wittiness, and his compassionate spirit. The family will receive friends on Wednesday July 31, 2019 from 10 am until the Celebration of Life Service at 2 pm at Long Hollow Baptist Church in Hendersonville with Jerry Davis officiating. Pallbearers will include Bo Williams, Tate Williams, David Williams, Kerry Rogers, Travis Massengill, Andy Lehman, Aaron Cowles and Marvin Turner. In lieu of flowers, memorial contributions may be made to the children’s college fund at any First Tennessee bank location under the Amanda Carol Prichard Memorial Fund. The family has entrusted services to Austin & Bell Funeral Home and Cremation Service, 104 Sanders Ferry Road, Hendersonville, TN. 615-822-4442.

Jason Philip Prichard, 43, of Gallatin, Tennessee, passed into eternal life on Saturday July 27th, 2019 after a brief but valiant fight with cancer. Jason spent his final days surrounded by family and loved ones. Jason will be forever remembered... View Obituary & Service Information

The family of Jason Philip Prichard created this Life Tributes page to make it easy to share your memories.