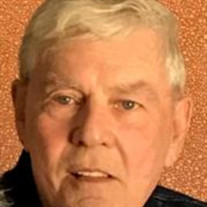 Jerry Wayne Clark, Sr., age 74 of Greenbrier, passed away August 1, 2020. Jerry was born on April 22, 1946 in Lebanon, Tennessee to the late O.J. and Lola Clark. Jerry retired from the United States Army after twenty years of service at the... View Obituary & Service Information

The family of Jerry Wayne Clark, Sr. created this Life Tributes page to make it easy to share your memories.

Send flowers to the Clark family.