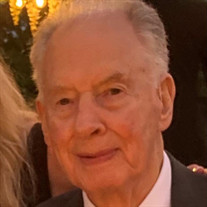 Joe Leroy Jackson, scholar and musician, US Naval Officer in the Korean War, loving and devoted family patriarch and friend, passed away on September 28, 2021. Joe was born on June 19, 1928 to humble beginnings in Stayton, Tennessee. He graduated from Charlotte High School in 1947 and was Captain of the high school football team. He met Amy Ruth Wall in 1948 at an outing at the rock quarry across from Amy’s aunt’s house in Cumberland Furnace, Tennessee. They were married on July 28, 1952 in Charlotte, Tennessee. Together they raised four children: David, Roberta, Jimmy & John. During the Korean War, Joe enlisted in the U.S. Navy and rose in rank to Navy Lieutenant Officer. He served as Band Director and later became Principal of Springfield High School. He was a professor of education at George Peabody College in Nashville from 1966 until 1972. He later became the Headmaster at Indian Springs School in Helena, Alabama. Joe was a lifelong, self-educated musician and played double bass with the Nashville Symphony Orchestra for 14 years. Additionally, he played with the Tupelo Mississippi, Tuscaloosa and Huntsville Alabama Symphony Orchestras and taught upright bass at The Alabama School of Fine Arts, and privately at home. He was quite the sports fan and found himself cheering for the Tennessee Titans every Sunday afternoon after relocating back to Nashville in 2004. His relationship with God was of upmost importance. He recognized the importance of hard work and determination which modeled his beliefs throughout his life. Joe had a passion for reminiscing about his early years and could remember dates better than anyone on this earth! He is preceded in death by parents Sally Story Jackson and Robert Freeman Jackson; siblings Emmitt Jackson, Leon Jackson, Odell Jackson Wall, Louise Jackson Fowler, Ruth Jackson Simpson, and Billy Jackson. He is survived by his wife, Amy; children David, Roberta, Jimmy and John; eight grandchildren and 8 great-grandchildren. Visitation for family and friends will be held Friday, October 1 at Austin Bell Funeral Home from 4:30 – 8:00 PM. Funeral services will be held Saturday, October 2 at Hendersonville Church of Christ at 11:00 AM. Buriel at Union Cemetery in Dickson, TN will follow the funeral and will be at 2:30 PM. In lieu of flowers, donations can be made to the Church’s of Christ Disaster Relief Fund at www.disasterreliefeffort.org. You may offer your condolences online at www.austinandbell.com Services have been entrusted to Austin & Bell Funeral Home and Cremation Service, Hendersonville. 615-822-4442.

Joe Leroy Jackson, scholar and musician, US Naval Officer in the Korean War, loving and devoted family patriarch and friend, passed away on September 28, 2021. Joe was born on June 19, 1928 to humble beginnings in Stayton, Tennessee. He graduated... View Obituary & Service Information

The family of Joe Leroy Jackson created this Life Tributes page to make it easy to share your memories.

Joe Leroy Jackson, scholar and musician, US Naval Officer in...

Send flowers to the Jackson family.