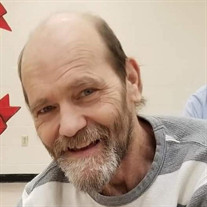 Kenneth Mark Baxter, age 66, passed away Monday, March 8, 2021 at his daughter’s home in Goodlettsville, TN surrounded by family. Mark was born in Pocahontas, Arkansas on February 5, 1955 to R.V. and Betty (Walls) Baxter. From his earliest days on earth to his last he nourished those around him with love, faith, and music. His family was the center of his life which came as a result of his loving relationship with his Creator. At the age of seven he began singing as part of “The Gospel Singing Baxter Family” where his beautiful tenor voice was featured. In 1980 he and his brothers moved from central Illinois to Nashville, TN to perform in “Sing the Glory Down” a gospel music show at Opryland. They then moved on to a recording contract with Sun Records touring and appearing in clubs at Nashville’s Printer’s Alley and various venues and showcases from 1980-1995. He is survived by his former wife, Charlene Cripps; their two children Joshua (Lesley) Baxter and Heather (Thomas) Miller, both residing in Goodlettsville, TN. He was blessed with four grandchildren, Payden and Brooklyn Miller, and Mason and Evelyn Baxter; two brothers, Rick (Karen) Baxter, Hendersonville, TN and Duncan (Jeanine) Baxter, White House, TN; and two sisters, Melodie Baxter, Hendersonville, TN and Lori (Jef) Allardin, Bloomington, Il Mark was happiest when surrounded by those he loved. He delighted in making them laugh. He is preceded in death by his mother, father, and sister Paula. Per Mark’s wishes, a private family service will be held on Thursday, March 11, 2021 with a Celebration of Life service to be planned at a later date. The family requests that memorial donations be made to the American Diabetes Association or to the Humane Society. You may offer your condolences online at www.austinandbell.com Services have been entrusted to Austin & Bell Funeral Home and Cremation Service, Hendersonville. 615-822-4442.

Kenneth Mark Baxter, age 66, passed away Monday, March 8, 2021 at his daughter&#8217;s home in Goodlettsville, TN surrounded by family. Mark was born in Pocahontas, Arkansas on February 5, 1955 to R.V. and Betty (Walls) Baxter. From his earliest... View Obituary & Service Information

The family of Kenneth Mark Baxter created this Life Tributes page to make it easy to share your memories.

Send flowers to the Baxter family.