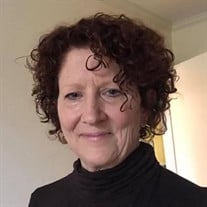 Laurie Brewer, Aug. 26, 1953 – Oct. 29, 2021 Laurie Brewer of Arrington, Tenn., died Oct. 29, 2021, at Vanderbilt University Hospital after a long, valiant and inspiring struggle against a rare blood cancer. She was 68. She was born Laurie Kelly on Aug. 26, 1953, in Troy, Ohio, to Patsy Ruth (Van Fleet) and Mack Wayne Kelly. She grew up in Springfield, Ohio, and graduated from Shawnee High School in 1971. After living for a short time in western Canada, having moved there with her family in 1971, she returned to Ohio to marry Rick Brewer. The couple would have celebrated their 50th wedding anniversary on Dec. 26, 2021. Laurie approached life with intelligence, compassion, courage and determination. She was naturally drawn to nursing, becoming a Registered Nurse after studies at Ohio State University in Lima, Ohio, in 1979 and at Antioch College in Yellow Springs in 1997, while she and Rick raised their two sons, Matthew, born in 1974, and Lucas, born in 1981. She later earned a master’s degree in business administration through the University of Phoenix in 2004. She worked throughout her studies, serving in the Findlay, Ohio, Regional Medical Center ICU (1980-84), the open heart recovery and cath lab at Miami Valley Regional Medical Center (1984-90), as director of the cardiac cath lab at Springfield, Oho, Mercy Hospital (1990-98), director of cardiovascular services at New Hanover Regional Health Care System in Wilmington, N.C. (1998-2000), and director of cardiovascular and radiology services at St. Thomas Hospital in Nashville, Tenn (2000-2004). She worked most recently for HCA corporate headquarters in Nashville, as director of solutions trust. A practical and earthy person, she was an active partner in Rick’s dairy farming enterprise, feeding and milking cows, driving tractors and doing everything needed of her to keep the operations flowing. Laurie cared deeply for her family and friends, and had a fierce sense of social justice. She was a formidable adversary to those who were unfair to anyone she loved. Coupled with her compassion was a keen sense of competition that came out in her merciless approach to euchre and her enthusiastic support for hometown sports ranging from youth to vintage base ball and professional league teams. She was a 20-year fan of the Nashville Sounds minor league baseball team. As a Nashville Predators season ticket holder, she could be seen in the stands spiking her fingers downward when the team scored. The family’s border collie is named Gnash after the Preds’ mascot. The greatest sense of joy and accomplishment for Laurie and Rick came from her sons, Matthew and Lucas, watching them grow into distinguished, determined and compassionate young men. She was able to watch her five grandchildren grow and blossom. Her home is a testament to the things that gave her peace and gratitude — rooms lined with family photographs, porches facing the wooded hillsides and cascading flower gardens where she followed the lives of birds and breathed the fragrant air. Laurie showed monumental courage and grace in facing down her final adversary, T-cell prolymphocytic leukemia. She was instrumental in helping administer a Facebook group page, ‘You Are Not Alone,’ for TPLL patients and their caregivers around the world, and in doing so made many friends and provided support and hope for hundreds of people afflicted with the rare disease. She was preceded in death by her parents, Patsy and Mack Kelly. She is survived by her husband, Rick, sons Matthew (Melissa) Brewer of Danville, Ohio, and Lucas (Mary) Brewer of Lewisburg, TN; grandchildren Garrett, Cale and Karly, Bo and Blair "Margaret"; brother Michael (Beverly) Kelly of Marietta, Ohio, and sister Jody (Chris Dale) Kelly of Terrace, B.C.; nieces Hannah and Laura Dale of Terrace, B.C., and niece Sarah Kelly and nephew John Kelly, both of Glen Cove, N.Y.; sisters-in-law Deborah (Brewer) Atherton and Barbara (Brewer) Carmichael, and mother-in-law Julie Brewer, all of Springfield, Ohio. The family wishes to thank all the dedicated medical professionals who helped Laurie at Sarah Cannon Cancer Center, M.D. Anderson Hospital, and particularly the kind, caring and competent staff on the critical care floor of Vanderbilt University Hospital. The family also is deeply grateful for the kindness and generosity of Laurie’s many friends. Anyone who wishes to honor Laurie’s memory is invited to contribute to the TPLL research project at the University of Toronto led by professor Patrick Gunning. Information on becoming a donor to this important work is available online at https://uoft.me/UTM-TPLL. Interment was at 1 p.m. Nov. 1 at Larkspur Conservation near Westmoreland, Tenn. Information on the Larkspur Conservation can be found at larkspurconservation.org. Her grave can be found by consulting the GPS system on the Larkspur website with a mobile phone. Only when you drink from the river of silence shall you indeed sing. And when you have reached the mountain top, then you shall begin to climb. And when the earth shall claim your limbs, then shall you truly dance. - Kahlil Gibran

The family of Laurie Brewer created this Life Tributes page to make it easy to share your memories.

Send flowers to the Brewer family.