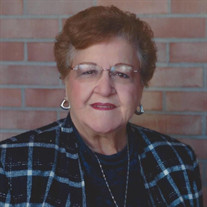 Lois Harris Catanzaro, age 88 of Nashville, went to be with her Lord and Savior on July 23, 2020. Lois was born and raised in Cleveland, Ohio, and attended John Hay High School, with an emphasis in secretarial and bookkeeping. At the age of 16 years old, she placed her faith in Jesus Christ, a decision that was of the upmost importance to her. She was married to Frank Jay Catanzaro, Jr. in January of 1954 and their son, Frank, was born while they lived in Cleveland, Ohio. The family moved to Roanoke, Virginia where their daughter, Barbara, was born. In 1960, they moved to Anderson, South Carolina where husband, Frank, was pastor of Asaville Baptist Church. From 1971 to 1976, Lois traveled with her family, singing and speaking in churches in evangelistic work. After this time, Lois went through a very difficult season that resulted in her being a single woman for the rest of her life. She lived in Greenville, South Carolina and attended Edwards Road Baptist Church. Being involved in a local church has always been very important to her. During that time, she worked in various administrative positions with insurance companies, the public school system, and a hardware sales company. In 1988, Lois moved to California to live near her daughter. She worked at Sparrow/EMI Music in the Credit Department for five years. When the company moved its employees to Nashville, Tennessee, she was part of that corporate move. A few years later, Lois became an Administrative Assistant to Staff Pastor Sam Mallory at Two Rivers Baptist Church. She worked at Two Rivers for eleven years, as well as attended church there. She was an alto in the church choir, and participated in several overseas trips to Brazil, Armenia and Israel. After retiring from her job at Two Rivers, she volunteered at St. Thomas Hospital West in the Dan Rudy Cancer Unit. Because she was a breast cancer survivor, she deeply enjoyed welcoming and encouraging patients and their family members. In 2011, she joined First Baptist Church in downtown Nashville. She participated in the choir for a season, but her favorite place at First Baptist was the Encouragers Sunday School class. Lois’ greatest joy was her grandchildren and her great grandchildren. She attended soccer games, orchestra performances, and jump rope competitions. When she couldn’t be with her grandkids and great grandkids, she enjoyed texting them, emojis included. She loved music and knew every verse to numerous hymns. She also loved the music of Nat King Cole, Engelbert Humperdinck and Karen Carpenter. She was very artistic and enjoyed making crafts. She was an excellent seamstress and was regularly doing alterations for her neighbors. She was a true MacGyver who could figure out a way to make anything work, whether it was something in her home or creating some tool to help her get around her apartment when her body was in a lot of pain. She loved attending dinner parties with lots of people. She enjoyed listening to everyone’s stories. She never forgot a person’s birthday or anniversary. She noticed what people needed and would send them a note of encouragement. And, in these last years, she was a good friend to many people at Villa Maria Manor Apartments. She loved her life there. Lois was preceded in death by: Sisters, Jacqueline Byrne, Audrey Southard and Joan Dennison; her mother, Naomi Harris, and her father, Robert Harris. Lois Harris Catanzaro is survived by her son, Frank Jay Catanzaro III and her daughter, Barbara Catanzaro Haynes; her grandchildren, Jonathan Catanzaro and his wife, Elissa, Matt Haynes and his wife, Nikki, Ian Haynes, and June Haynes; and her great grandchildren Josiah (12), Elianah (10), and Noelle (5) Catanzaro. Lois will be laid to rest at a private graveside service in Larkspur Conservation at Taylor Hollow. In lieu of being able to gather to celebrate Lois’ life, please consider donating in her honor to Ravi Zacharias International Ministries. Ravi was a teacher that she loved whose background, like hers, was in the Christian and Missionary Alliance church. You may donate online at https://www.rzim.org/give or mail a donation to RZIM, 3755 Mansell Road, Alpharetta, GA 30022 Arrangements Entrusted To: Sumner Funeral & Cremation, Gallatin, (615)452-9059 www.sumnerfuneral.com

Lois Harris Catanzaro, age 88 of Nashville, went to be with her Lord and Savior on July 23, 2020. Lois was born and raised in Cleveland, Ohio, and attended John Hay High School, with an emphasis in secretarial and bookkeeping. At the age of... View Obituary & Service Information

The family of Lois Harris Catanzaro created this Life Tributes page to make it easy to share your memories.

Lois Harris Catanzaro, age 88 of Nashville, went to be with her...

Send flowers to the Catanzaro family.