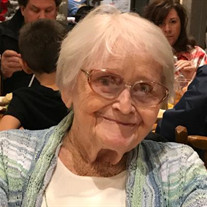 Patricia J. Kennerly of Hendersonville, TN, formerly of Victoria, TX, was called home to be with her Lord and Savior on Saturday morning, April 11,2020. Mama, Sister, Aunt Patty, Nanny, Pat, as she was known and loved by many, was born in Pittsburgh, PA on December 24, 1931 to Eugene C. and Helen R Gillespie. Patty spent her younger days in Pittsburgh, Kansas, Luling, San Antonio before the oilfield settled the Gillespie family in Alice, Texas. She graduated from Alice High School in 1948 at the age of 16 of which she always considered it the Dobie Gillis Era, stating that “It is a shame student’s today will never know that comforting peace.” She entered Incarnate Word in San Antonio to study nursing, but put her career on hold to marry her husband, James S. Kennerly, on Feb 2, 1951 in California, before he was deployed to Korea. The couple returned to South Texas to start and raise her pride and joy. Seven kids in tow, often wishing for a swivel belt around her waist with leashes and a drain in the middle of the floor, she somehow managed to enjoy friends, family, playing Canasta, Rook, being a substitute teacher, Den mother, leading the church choir, and even found herself teaching kindergarten at St Mary’s Catholic Church in Freer. In 1967, the family moved to Alice so that she could pursue her passion in the medical field, never letting the children know that they were poor. She spent the next 10 years working as an X-ray technician at Alice P&S Hospital. The family thrived and she kept working. Patty worked 35 years in various positions such as the Federal Programs Bookkeeper at Alice I.S.D. and as the Assistant Manager for Alice Teachers Federal Credit Union. In 1988, at the age of 56 she went back to college and obtained her Associates Degree from Victoria College. She then pursued and obtained her Medical Transcription Certification from Texas Vocational Schools. She worked as a medical transcriptionist in both Victoria and Edna and spent some time living in California before moving to Nashville where she remained working as a transcriptionist at Centennial Medical Center until retiring. She served as President of the Harris County Medical Society Alliance and was actively involved with the Texas Medical Association Alliance, the American Association Alliance and the Museum of Medical Science. She traveled some, as time allowed, but spent most of her time just enjoying family, plays, and concerts, especially if it involved her children or grandchildren. Her strength was in her love of her faith and trust in God. Her pride and joy were her family. She gave all that she had, giving her children life, a childhood, a home, and they never went without, even when she did. She opened her door and heart to everyone. She was known for taking in strays, both people and animals, and she would always make sure that others were taken care of before herself. So, Mama, in your words “I love you all the days!” “Good Night, I love you, and say your prayers.” You are home now. Rest in Peace. Patty was preceded in death by her parents; Eugene C and Helen R Gillespie of Alice, TX; sister and brother-in-law, Peggy and (Bill ) Huber of Dublin, TX; brother-in-law, Frank Arnone of Chandler, TX; and brother-in-law, Alan Garrison of Chandler, TX. Patty is survived by her brother, Eugene C (Josephine) Gillespie of Brentwood, TN; sister, Melodie Garrison of Chandler, TX; sister, Dodie Arnone of Chandler, TX; sister, Marilyn (Ron) Mirabella of Chandler, TX; sons: James A (Theresa) Kennerly of Chandler, TX; Mark L (Nancy) Kennerly of Charlotte, TX; John R Kennerly, (Jim White) of Hermitage, TN; daughters, Theresa J (Bubba) Whitt of Victoria, TX, Roxanne Carreon of Hendersonville, TN, Melissa A (Charles) Krumsiek of Piedmont, OK, Georgia L Kennerly-Lale of Victoria, TX; Grandchildren, Katy Beth Kennerly, Cody Kennerly, Christy (Clint) Hindes, Ryan Kennerly, Hoss (Shawn) Whitt, Laura (Eric) Brown, Thomas (Gina) Whitt, Ryan (Brenna) Carreon, Liam Carreon, Ian Carreon, Christen Krumsiek, Chance Krumsiek, Jacklyn (Thomas) Depine, Bailee Kennerly; great-grandchildren, Mason Kennerly, Callie Anna Kennerly, Kirsten Whitt, Jesse Whitt, Hunter Luke, Tanner Luke, Morgan Luke, Kacey Whitt, John Alex Whitt, Samara Whitt, Cort Hindes, Cali Hindes, Jack Kennerly, Sam Kennerly, Layton Depine, Pacer Depine, and Briggs Depine. Funeral Arrangements are incomplete at this time but will be held at Grace Funeral Home in Victoria, TX with a private grave side service. Serving as pallbearers are Hoss Whitt, Thomas Whitt, Liam Carreon, among other friends and family. A memorial service will be held at a later date. The family has entrusted services to Austin & Bell Funeral Home and Cremation Service, 104 Sanders Ferry Road, Hendersonville, TN. 615-822-4442.

Patricia J. Kennerly of Hendersonville, TN, formerly of Victoria, TX, was called home to be with her Lord and Savior on Saturday morning, April 11,2020. Mama, Sister, Aunt Patty, Nanny, Pat, as she was known and loved by many, was born in Pittsburgh,... View Obituary & Service Information

The family of Patricia Joan Kennerly created this Life Tributes page to make it easy to share your memories.

Send flowers to the Kennerly family.