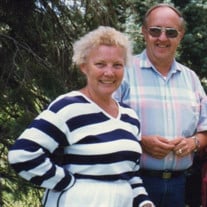 Patricia Ann Larkin, a resident of Castalian Springs, Tennessee, died October 10, 2021. Mrs. Larkin was born July 11, 1933, in Hibbing, Minnesota. She is the daughter of Dr. Clarence Swink and Ruth (Olson) Swink. She spent her early childhood years in Dunnell, Minnesota, and then graduated James Wood High School in Winchester, Virginia. She married James R. Larkin and together they raised a daughter, her namesake, Patricia Ann Larkin. Pat, as she was fondly known, worked for Montgomery Ward while in Virginia, Redstone Arsenal in Alabama, and the Ski Crest Lodge, in Crested Butte, Colorado. After her marriage to James, they returned to live in Mt. Crested Butte and Gunnison, Colorado, where Pat worked in the ticket office of the Crested Butte Ski Resort while her husband, James “Gus”, served in various capacities including Executive Vice President. After James’ retirement, the family moved to Albuquerque, New Mexico. Her husband, James, died July 6, 2014. Pat and her daughter Patti moved to Castalian Springs in 2016. Pat was a lifelong member of the Lutheran faith. She was fun loving and greatly enjoyed travelling the country, especially in their RV after her husband’s retirement. They also enjoyed time spent in later years in their winter home in Donna, Texas. Crested Butte and Donna were their happy places! Patricia is survived by her daughter, Patricia; niece, Retired Lt. Colonel Ann Petcavage; nephews, Paul Petcavage and John “Nick” Petrin; as well as other extended family. She is preceded in death by her husband; her parents; her sisters, Lois Petcavage and Mary Petrin; and brother-in-law, John Petrin. Interment will be at a later date, to be put to rest with her husband, at Faith Lutheran Church Columbarium in Albuquerque.

The family of Patricia Ann Larkin created this Life Tributes page to make it easy to share your memories.

Send flowers to the Larkin family.