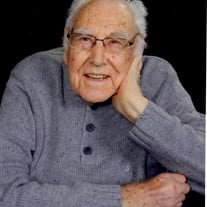 Ray died November 9, 2018 in Gallatin, Tennessee where he has resided with his daughter Carol and Tony Smith the past 8 years. He was born to William Franklin and Elvira Pearl (Smith) Taylor near Johnstown, Nebraska. The family moved to Sioux County Nebraska in 1926.  Ray attended first grade in Andrews and grades 2+-7 in Harrison.  The family moved again to the Kirtley Community northeast of Lusk, Wyoming.  Ray, his brother Don and sister Francie attended Node School riding a bus 20 miles round trip.  He graduated from Lusk High School in 1937. After graduation, he helped his father on the family farm.  January1938 he enrolled in Barnes School of Commerce in Denver, CO for two years.  He worked various jobs paying for his education.  In 1940 he started working the Midwest Hardware as a clerk and as an appliance service man.  He attended several schools with Maytag in Denver. He was called in the draft of July 1942 and enlisted in the Army, July 7, 1942 at Fort Warren in Cheyenne, Wyoming.  He served twenty-three continuous months on the front lines as a gunner in the African, European Campaign with the 3rd Infantry Division. Before leaving the states he meant his future bride Lorraine Livermore at a high school classmate's home New Year's Eve 1942-43.  Lorraine served in WAC in London with the Eisenhower typing pool.  They had a chance meeting on R & R on the French Riviera and made a pact to contact each other upon return to the states after the war.  Lorraine came for a visit and they were married January 20, 1946 at the Congregational Church in Lusk.  To this union 2 children were born Carol Jean and Wayne William. After the war, Ray returned to Lusk and the Midwest Hardware mainly as an appliance installer and maintenance repair man for several years.  The owner closed the store and he started working for the City of Lusk as a meter reader and meter maintenance for both water and electric departments. Ray was always active and involved in the community.  He served for several years as a Cub Scout Master. He was very involved in the VFW serving locally with Post #5711 in various offices, the state level, and as the Wyoming Commander 1989-1990 which led to service on various national committees.  He was a life member of the American Legion, Post #1, a member of Elks Lodge # 1797 serving as Exalted Ruler in 1995, served on the Niobrara Alumni board for several years, AARP committees, and was a member of the Congregational Church. In September 1981 Lorraine passed away with cancer, after Lorraine passed, he met the widow of one of his Army friends in Illinois the following summer. They were married in Hinsdale, Massachusetts November 10, 1982.  He brought her to Lusk and they enjoyed camping, took several cruises and she helped him with his correspondence while serving as the state VFW Commander.  Helen passed away in 1992 with cancer. For several years he enjoyed traveling and living in Arizona in the winter and returning to Lusk in the summer with his friend Juana Gras from Casper, Wyoming.  He enjoyed life and liked to travel making it to all 50 states.  He started writing his memoirs with a story group in Arizona.   He never met a stranger and he loved to exchange stories. Preceding his in death in addition to his parents are his wives Lorraine and Helen, his brother Don and wife Fern Lenz, his sister Francie and husband Bob A. Johnson, and a nephew Larry J. Johnson. He is survived by daughter Carol (Tony) Smith of Gallatin, TN, son Wayne (Ginger) of Laramie. WY: Grandsons Anthony W. Smith, Gallatin, TN and Cory Taylor of Laramie, WY, Granddaughters Michelle Morton of Gallatin, TN, Tiffany Taylor of Anaheim, CA: Great Granddaughters Zoe Taylor Morton of Gallatin, TN and Laeya Marie Taylor of Anaheim, CA. Two Step-Sons, Wayne (Wendy) Mottor and family and Art (Irene) Mottor and family both from Hinsdale, Mass, Two step-daughters Katie Mottor and Julie Aaron both of Charlemont, MA.  Numerous nieces, nephews and friends also survive. Memorial Service will be held on Saturday, Nov. 17, 2018 at the Gallatin First Baptist Church.  The service will be at 2 PM Sumner County Funeral and Cremation Services in charge of local arrangements.  615-452-9059

Ray died November 9, 2018 in Gallatin, Tennessee where he has resided with his daughter Carol and Tony Smith the past 8 years. He was born to William Franklin and Elvira Pearl (Smith) Taylor near Johnstown, Nebraska. The family moved to Sioux... View Obituary & Service Information

The family of Ray Burnard Taylor created this Life Tributes page to make it easy to share your memories.