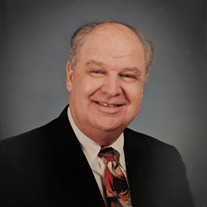 Dr. Renald Carl Eichler, Jr. May 28, 1935 – December 7, 2020 Renald was born and raised in Pensacola, FL to the late Renald Carl Eichler, Sr. and Annette Beal Eichler. He grew up in a loving home with his sisters, Nita and Franceen. Renald was a gifted pianist and began playing at a young age. He pursued his degree in music and graduated from North Texas State University with a Bachelor’s in music. He then served his country in the US Army (25th Infantry) and was stationed in Hawaii. He served as Chaplain’s Assistant and directed the Men’s Army Chorus. After his honorable discharge, he moved to Nashville to pursue his Master’s in Music at Peabody College. While in school, he became the Minister of Music at Edgefield Baptist Church where he served for over 20 years. He also taught piano and voice privately. Renald worked for the State of TN at Jordonia in the mid-60’s. While there he saw the injustices of the juvenile/educational system and sought to change it. In 1969, he opened a school/treatment center that ultimately lasted for 40 years and changed the lives of many. He returned to Peabody/Vanderbilt and earned his Master’s and Ed.S. in Education and ultimately his Doctorate in Human Development and Counseling. In the mid-80’s, he was instrumental in the opening of Cumberland Hall Psychiatric Hospital which revolutionized the concept of “continuum of care”. Although retired after the school closed, Renald was always focused on the future. He continued to play the piano daily and supported Priscilla in pursuing her art. Renald was a teacher and whether it was teaching someone music, how to work out a problem or how to be better at what you were doing, he was truly a force. He touched so many lives. Renald loved many things – family first and in no particular order: opera/classical music, history, playing the piano, a good steak dinner, Pensacola Beach, an Old Fashion on the sweet side, sweets in any shape or form, 4th of July fireworks, Priscilla’s cooking, video games, Winston Churchill and everything about Christmas, especially the music. We will miss him this Christmas and will feel his presence in future family gatherings…always. Renald is predeceased by his parents, brother Otto Eichler (infant), and brother-in-law, John Lovvorn. Renald is survived by his loving wife of 41 year, Priscilla Eicher and his children, Dr. Carla Flexer (Louis), Lee Swinehart (Lisa), and Melanie Moore. He is also survived by his sisters Nita Lovvhorn and Franceen Cornelius (Franz); his grandchildren Ben Moore, Leah Moore, Mya Swinehart, Ronnie Swinehart, and Rosie Swinehart. There will be no service at this time. In lieu of flowers, please make donations to: Monthaven Arts and Cultural Center 1017 Antebellum Circle Hendersonville, TN 37075 (615) 822-0789 www.Monthavenartsandculturalcenter.com/donate or to the charity of your choice. You may offer condolences at www.austinandbell.com Service entrusted to Austin and Bell Funeral Home and Cremation Service, Hendersonville. 615-822-4442.

Dr. Renald Carl Eichler, Jr. May 28, 1935 &#8211; December 7, 2020 Renald was born and raised in Pensacola, FL to the late Renald Carl Eichler, Sr. and Annette Beal Eichler. He grew up in a loving home with his sisters, Nita and Franceen.... View Obituary & Service Information

The family of Renald Carl Eichler Jr. created this Life Tributes page to make it easy to share your memories.

Send flowers to the Eichler family.