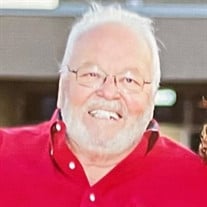 Richard “Rick” Dean Harding, age 69, of Gallatin, TN passed away on September 28, 2021. Rick was born on February 2, 1952 in Aledo Illinois to the late William Harding Jr. and Mary Lawson. Rick was a graduate of Moline High School. In addition to his parents, Rick was preceded in death by his brother, William Harding; sister, Mona Harding; brother-in-law, Scott Sherretts; daughter, Annie Harding. He is survived by, his loving wife, Linda “Lynnie” Harding; son, Scott (Shannon) Harding; grandchildren, Brody Harding, Brock Harding, and Hunter Seidlitz; sister, Sandra Sherretts; sister-in-law, Linda Harding; mother-in-law, Jane Serres; niece, Melissa Smith; nephew, Jason Harding; and numerous step-children and step-grandchildren. Mona and Rick moved to the Franklin area when they were 10 & 12 and Mona and Lynnie became instant best friends! Mona called the shots with RIck and told him to stay away from my friend! Fast forward 53 years later, Rick invited Lynnie to his grandson's MHS basketball game. Their love story began that night and the rest is history! Thank you, Brody Rick cherished his family. He had a ginormous heart and would do anything for anybody. His wife Lynnie was the love of his life… they enjoyed watching their Cubs and Titans along with dining out and traveling. Rick had a very special relationship with his older sister Sandy. The two spent countless hours together that they will always cherish. Rick loved bragging about his grandkids. If he wasn’t at a game or watching his favorite teams play, you could find him watching or listening to his grandkids sporting events. Rick also Coached Moline Legion Baseball and Worked at Clausen Property Management. He was a longtime baseball coach in the Quad Cities. He built and developed lifetime relationships with the players he coached. Rick Retired from Burlington Northern Railroad. Arrangements Entrusted To: Sumner Funeral & Cremation, Gallatin (615) 452-9059 www.sumnerfuneral.com

The family of Richard "Rick" Dean Harding created this Life Tributes page to make it easy to share your memories.

Send flowers to the Harding family.