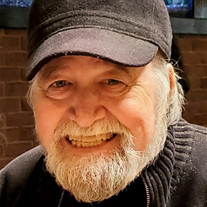 Richard E. Shook, age 72, of Hendersonville, Tennessee, passed away on Thursday, July 2, 2020 at 7:10 p.m. at home. He was born in Little Rock, Arkansas on September 25, 1947 to Ida Mae and Otis Shook. He was raised by his mother and step-father, Daniel Floyd Dodson, from age 2. He is survived by his “wife”, Carol E. Cole; sister, Iris Ebsen of Little Rock, Arkensas; brothers, Dale Shook of Little Rock, Arkanasas and Jerry Shook of Panama City, Florida; and Half-sisters, Debbie Borkowski of Heber Springs, Arkansas, Connie Alessi of Claremore, Oklamhoma and Janet Chapman of Angola, New York. During high school at Central High in Little Rock, Richard joined a band called Merging Traffic. They had a hit song called “Bit by Bit” which he sang and played bass on. They were the opening act for Credence Clearwater Revival while he was freshman at the University of Arkansas. While still a student there, he enlisted in the Navy. He spent most of his four-year service in the Tonkin Gulf in Vietnam and in the North Atlantic. Upon his return from service, his Decca recording contract was null and void. It was then that he headed to Nashville to help his brother, Jerry, build and run a recording studio on 18th Avenue South, The Shook Shack. There he landed a job with Jerry Reed and played bass and sang with the band on the soundtrack for “Smokey and the Bandit”. The band opened Universal Studios in Orlando, Florida with Burt Reynolds and The Bee Gees. He travelled and recorded with Jerry Reed for the next seven years. Richard played with the like of James Brown, Chet Atkins, BB King, and a long list of country and gospel greats. He played the Grand Ole Opry and Hee Haw several times. His career was ended in 2004 after another car hit him head-on, causing a stroke and leaving him paralyzed on his right side, and unable to speak, read, or write. He spent years of physical therapy at the Nashville VA and years of speech therapy at Bill Wilkerson Speech at Vanderbilt. He continued to learn to read, write, walk and talk up until a few weeks ago. He died of a rare cancer, ampullary adenocarcenoma, with a fight to the end. He was so determined, never complained, and lived life happily. He was a joy to all and will be truly missed. The gates were open when he arrived in heaven. A graveside service with Military Honors will take place at a later date at Nashville National Cemetery. Memorial contributions may be made to Giving In Faith Together (GIFT) at https://www.giftnashville.org/take-action or 2804 Azalea Place, Nashville, TN 37204. The family has entrusted services to Austin and Bell Funeral Home and Cremation Service, 104 Sanders Ferry Road, Hendersonville, TN. 615-822-4442.

Richard E. Shook, age 72, of Hendersonville, Tennessee, passed away on Thursday, July 2, 2020 at 7:10 p.m. at home. He was born in Little Rock, Arkansas on September 25, 1947 to Ida Mae and Otis Shook. He was raised by his mother and step-father,... View Obituary & Service Information

The family of Richard E, Shook created this Life Tributes page to make it easy to share your memories.

Send flowers to the Shook family.