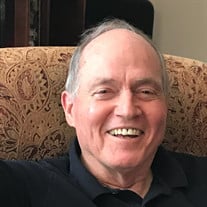 Ronald Ray “Ron” Reeves, age 79 of Hendersonville, passed away peacefully on November 6, 2021. Ron was born on April 4, 1942 in Nashville to the late Cecil Harold and the late Rosa Gill Reeves. He is survived by his loving wife of 54 years, Marilyn Crews Reeves; children, Robin Willmore (Tim) of Gallatin, Amy Denley (Eric) of Louisville, Kentucky, and Chris Reeves (Allie) of Mt. Juliet. He is also survived by sisters, Carol Stone of Franklin and Marian Williams of Colombia, Tennessee; brothers, Harold Reeves (Pam) of Franklin, Mike Reeves of Pleasant View, and Donald Reeves (Carolyn) of Nashville. Ron was the beloved “BaPop” to 6 grandchildren, Nick Green and Abi Green of Gallatin, Eliza Denley, Molly-Louise Denley & Isaac Denley of Louisville, Kentucky and Crews Reeves of Mt. Juliet. Ron was a graduate of Antioch High School and earned a Bachelor of Science degree in Electrical Engineering in 1965 from Tennessee Tech University. He was a 4-year letterman in football, earning all-conference awards as a fullback and leading the TTU Golden Eagles in scoring in 1963. Ron worked as electrical engineer for Boeing Aircraft on the Saturn V space program at the Space Center at Cape Canaveral, FL until 1969. He then worked for LTV Aerospace Company at NASA Langley Research Center in Virginia. In 1974, Ron relocated to his home state of Tennessee, where he began a 38 year career with the Tennessee Valley Authority. Ron was a devoted husband, father and grandfather, who enjoyed sharing his love of the outdoors with his family. He was an avid football fan, fisherman, and family man who loved teaching impromptu history and science lessons to his grandchildren. Ron was a member of Hendersonville First Baptist Church, where he enjoyed attending Sunday School and participating in a neighborhood men’s Bible Study. There will be a celebration of Ron’s life held on Friday, November 19, 2021 at 1:00 P.M. from the Chapel of Austin & Bell Funeral Home in Hendersonville with Dr. Bruce Chesser officiating. Ron will be laid to rest in a private family graveside service in Beech Cemetery. In lieu of flowers, the family requests donations to the Lewy Body Dementia Association (https://www.lbda.org/donate/) or the Tennessee Baptist Children’s Home (https:// tennesseechildren.org). Arrangements Entrusted To: Austin & Bell Funeral Home-Hendersonville (615)822-4442 www.sumnerfuneral.com

Ronald Ray &#8220;Ron&#8221; Reeves, age 79 of Hendersonville, passed away peacefully on November 6, 2021. Ron was born on April 4, 1942 in Nashville to the late Cecil Harold and the late Rosa Gill Reeves. He is survived by his loving wife of... View Obituary & Service Information

The family of Ronald Ray "Ron" Reeves created this Life Tributes page to make it easy to share your memories.

Send flowers to the Reeves family.