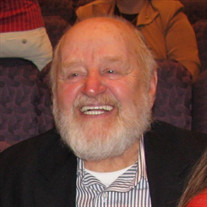 Rudolph Buford “R.B.” Parker Jr., age 92, passed away on Monday, May 6, 2019 at Long Hollow Terrace, an assisted living facility in Hendersonville, Tennessee. He was the only child of his loving parents, Rudolph Parker and Ada Mai (Clark) Parker. He is survived by his wife of 16 years, Bertie Parker. He is also survived by four children, Pam Tate, Carol Jones, Buddy Parker, Constance Carter, from his first marriage to Carolyn Parker. RB Parker Jr. lived a full and rich life and was truly a man that gave freely and generously to those around him. He was blessed to have many dear friends whom he truly loved. RB accepted Christ as his Lord and Savior at a young age but rededicated his life to Christ at the age of 76 and was baptized at that time. RB Parker Jr. was born in Nashville on March 08, 1927. He grew up in Lawrenceburg, TN but made his home in White Bluff, TN on the Promised Land Farm. At the age of 18, he joined the Merchant Marines and served on a ship during World War 2. He was given an honorable discharge from the Coast Guard at the end of the war. Upon returning home to Nashville, he was given the opportunity to attend the YMCA Night Law School. He graduated from the law school in 1950 and immediately began serving as the Assistant District Attorney for Davidson County from 1951-1955, first under District Attorney J. Carlton Loser and later under District Attorney Harry Nichol. After leaving the District Attorney’s Office, RB continued his law career in private practice that would span more than 60 years and was one of the longest practicing attorneys in the state of Tennessee. RB represented many interesting and famous people such as Ray Price, Willie Nelson and Chief Justice William O. Douglas. He participated in many significant cases such as the Hoffa prosecution and the Waverly Explosion where he served on the Steering Committee for the numerous plaintiffs. RB’s life at the Legal Bar touched many people. In 1998, Nashville School of Law honored RB during their annual recognition dinner for his outstanding law career. In 2014, he received the AV Preeminent Award from Martindale Hubbell as the highest possible rating in both legal ability and ethical standards. A memorial service will be held on Saturday, June 8, 2019, at 1:30 p.m. The service will take place at Cumberland Presbyterian Church, 3 Court Square, Charlotte, TN 37036. In lieu of flowers, please make any desired contribution to the Nashville School of Law in honor of RB Parker Jr. The family has entrusted services to Austin & Bell Funeral Home and Cremation Service, 104 Sanders Ferry Road, Hendersonville, TN. 615-822-4442.

Rudolph Buford &#8220;R.B.&#8221; Parker Jr., age 92, passed away on Monday, May 6, 2019 at Long Hollow Terrace, an assisted living facility in Hendersonville, Tennessee. He was the only child of his loving parents, Rudolph Parker and Ada Mai... View Obituary & Service Information

The family of Rudolph "RB" Buford Parker Jr. created this Life Tributes page to make it easy to share your memories.