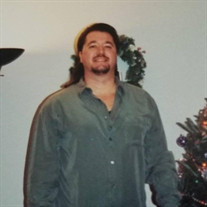 Terry “TJ” Bergman, age 56 of Gallatin passed away October 16, 2020. Terry was born on October 5, 1964 in Mountain View, California to the late Melvin Leo Bergman and the late Marilyn Helene Mock Bergman. Terry had a free spirit and a heart of gold, would do anything to help a friend. He was a wonderful dad to Miranda, a great brother and friend. Terry loved playing guitar and moved to Tennessee from California to follow his dream of being a musician, and he became the bass guitar player in a band called Electric Blue shortly after he arrived in TN. Growing up in Newark, California he spent a lot of time boating, water skiing, at the beach and he also enjoyed scuba diving. The first home he bought was in the Santa Cruz Mountains in California so that he could be in the mountains and by the ocean. He always enjoyed being around water and boats, at lakes and the ocean. He loved the outdoors. After moving to Tennessee, he decided to become a Marine Mechanic, which allowed him to spend his workdays around lakes and boats. Prior to that when he was in California, he had a variety of businesses including a restaurant repair company, auction company, and others. Terry was a veteran of the United States Air Force and was stationed in Biloxi, Mississippi. Terry is survived by his daughter, Miranda Bergman of Gallatin; brother, Lee Bergman of Nevada; sister, Jayne Dower (Tom) of Florida; nieces Carissa Bergman and Lauren Bergman; nephews, Chris Dower and Danny Dower; and Miranda’s mother, Deborah Bergman. In accordance with his wishes, Terry was cremated and a celebration to honor his life will be held at a later date. In lieu of flowers arrangements have been made for a College Trust fund for his daughter Miranda, as she was the center of his world and he will not be able to be here for her; donations may be sent to Edward Jones FBO of Miranda Bergman, 879 Greenlea Blvd, Suite 104 Gallatin, TN 37066. Arrangements Entrusted To: Sumner Funeral & Cremation, Gallatin (615)452-9059 www.sumnerfuneral.com

The family of Terry John Bergman created this Life Tributes page to make it easy to share your memories.

Send flowers to the Bergman family.