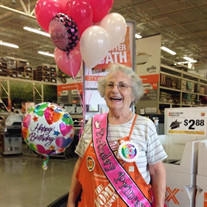 Thelma Taylor, born August 18, 1931 (88), passed away Saturday March 28, 2020, in her Gallatin home with her family and little dog Muddy by her side. She had a hard battle since a stroke in January, but we are thankful for the opportunity to say goodbye. Thelma is now with her heavenly father and feeling no pain. She was born in Luzerne, Kentucky to parents, William Sylvester and Josephine Constance Goff. She was the youngest of 5, with 2 brothers and 2 sisters. Growing up during the depression, she learned the importance of never throwing anything away, a wisdom she certainly exemplified her whole life. Thelma loved to read, especially her Bible. She illustrated that one never stops learning, if you keep reading. She began nursing school as a young adult, but nursing students were not permitted to marry. So when Thelma met Walter Taylor in 1950, she put her education on hold to wed WT and start a family. Thelma gave life to 4 children, her 2 boys, Glenn and Gary, and her 2 girls, Beverly and Joy. In 1973, she completed her nursing education at the University of Tennessee at Nashville. She then became instrumental in the opening of the emergency room at Hendersonville Hospital. She went on to serve the hospital ER for 25 years before retirement. Years later, she became known by many as the smiling greeter at the Hendersonville Home Depot. She was active in church and considered church friends as family as well. An advocate for women in the community, she was a long-time member of the women’s scholarship group, P.E.O, and was also involved in the Red Hat Society, both of which provided her with a large community of cherished friendships. Her skills were not limited to that of a nurse. She was also a skilled woodworker, seamstress, blueprint designer, landscaper, and whatever she needed. She never waited for help to get things done. Thelma had a gift of knowing exactly what needed to be done and that it needed to be done RIGHT NOW. She and WT divorced in 1981. While it was a hard time, she never let it deter her or her children. She raised her children to be self sufficient, family oriented, and God fearing. Thelma was preceded in death by her parents and siblings. She leaves behind her 4 children,18 grandchildren, and more great-grandchildren than we could accurately count. Her friends and family knew her to be kind and loving, but also honest and outspoken, never shying away from speaking her mind. She had an abiding curiosity and fondness for nature and animals, including her little dog, Muddy, who loved to lie by her side at all times. She loved to build things with her hands, and her family found it nearly impossible to keep her from buying new tools and taking on projects even in her old age. She had a faith in God that never wavered, even in the most trying times. She loved God, Bluegrass music, fresh tomatoes with ranch dressing, Strawberries, and going shopping. But mostly, she loved her great big family. She always exuded love without discrimination. Her home and heart was always open to help others. Having a generous heart, she would give till she had nothing left to give. Thelma, who was known by all as “Oma,” was not only their matriarch, but their rock. Having survived everything from the Great Depression, to multiple wars, and experiencing our current global pandemic, as well as times of personal suffering, she maintained a strength and independence that her family grew to rely upon and admire. While it will be challenging to navigate life without her, we are comforted and guided by her great influence on our lives. When times get hard, many will likely ask themselves, “How would Oma handle this?”. In that way, she will live on in the many people who loved her. There will be a private graveside service for Thelma held at Larkspur Conservation at Taylor Hollow. Arrangements Entrusted To: Sumner Funeral & Cremation, Gallatin (615)452-9059 www.sumnerfuneral.com

Thelma Taylor, born August 18, 1931 (88), passed away Saturday March 28, 2020, in her Gallatin home with her family and little dog Muddy by her side. She had a hard battle since a stroke in January, but we are thankful for the opportunity to... View Obituary & Service Information

The family of Thelma Taylor created this Life Tributes page to make it easy to share your memories.