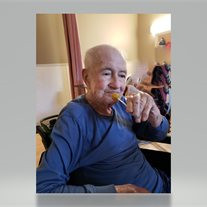 Wesley Smith Dallas, age 91, of Gallatin, Tennessee, passed away on Saturday, November 9, 2019 at the Gallatin Center for Rehabilitation and Healing.   Wesley (Dub) was born July 16, 1928 in Lafayette, TN to Wesley M. Dallas and Kitty M. (Smith) Dallas, who preceded him in death, along with three brothers (Donald Dallas, Hillous Dallas, and Larry Dallas), a sister (Virginia (Dallas) Law, a grandson (Danny W. Dallas), two granddaughters (Danielle Dallas and Mary Holmes), three sons-in-law, and two daughters-in-law.  He shared 64 years of marriage with Bonnie L. (Dotson) Dallas who preceded him in death, and they were blessed with four children: Gary D. Dallas, Debi K. (Dallas) Horton, David W. Dallas, and Myra Kim Dallas. Wesley and Bonnie lived at many locations during their marriage, but were residents of Gallatin for over half a century.  He worked many different jobs, including 13 years at Peterbilt Motors, and most of his lifetime he did what he loved most – driving a truck. Survivors include his 4 children, 12 grandchildren, 18 great-grandchildren, and 3 great-great grandchildren. A Memorial Service will be held at 1 – 4 p.m. on Saturday, November 23, 2019 at The Lord’s Sanctuary at 734 Red River Road, Gallatin, TN, officiated by Bro. Jerry Peace.  The family hopes to spend this time visiting and sharing stories and will provide refreshments. The family is thankful to have Sumner County Funeral and Cremation Services handle final arrangements.  615-452-9059.  Family contact:  615-406-5001.

The family of Wesley Smith Dallas created this Life Tributes page to make it easy to share your memories.

Send flowers to the Dallas family.