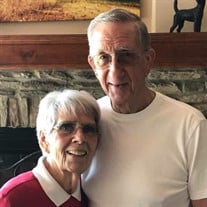 Clark, William Eugene Sr., 1/29/1936 - 9/21/2020 William (Bill) Clark age 84 of Hendersonville, TN. passed away Monday, September 21 at Tri Star Hendersonville Medical Center. He was born in Ann Arbor, Michigan. He is the son of Raymond Matthew Clark and Gertrude Mary (Collings) Clark of Chelsea, Michigan. On November 7, 1953 he married his childhood sweetheart Barbara Ann (Mshar) Clark at St. Mary’s Church in Chelsea Michigan. Bill worked at Hoover Ball and Bearing, then Federal Mogul, where he received many patents for his work before retiring in 1998. He was also an usher for the University of Michigan football and basketball games from around 1969-2013. Bill is survived by his wife Barbara of 66 years, and six children. Catherine Cantrell (Bob), Donna Stofer, Mary Jones (Rick), William Clark Jr., Elizabeth Parham (Tom) and Jenny Clark, and Bill’s younger brother Ronald Clark. Bill was blessed with 8 grandchildren and 10 great grandchildren. However, these raw statistics, facts, and dates are not our father. He was the PATRIARCH of our family and epitomized what it meant to sacrifice for family. He worked hard to take care of us and provided for us well. He taught his children & grandchildren practical & life lessons. He raised extremely capable adults and set the best examples ever. He was that rare gem that you could LITERALLY bet your life on. He was ALWAYS there whenever family was in need as well as for the celebrations too. He was our biggest cheerleader and did what he could to help us realize our dreams. He loved a good practical joke and really enjoyed making you laugh. He was a lifelong fan of the University of Michigan. He thought that ushering was the Best Job Ever! (Getting PAID to watch U of M football and basketball!) He raised us all to be fans of U of M too! He was an avid hunter and he taught his kids how to safely use guns, passing the love of hunting down to his son and grandsons. He loved board games, card games, pool, and country music, especially Johnny Cash. He wasn’t afraid to teach kids how to win by letting them lose. Yes, even to the point where the grandkids had to conspire together to try to beat him at Monopoly (I think they still lost). There are not many people who could beat him at chess, not even when we begged him to let us win just one! But on the rare occasion when one of us could beat him, it was a day of celebration! He left big shoes to fill, and I’m not talking about his size 14 feet. I doubt we can ever fill those shoes, but we will do our best to make him proud! His life was full of love and laughter; of family and friends. He will be forever missed. His memories will forever be treasures in our hearts. He was preceded in death by his parents, Raymond and Gertrude Clark, and his sister Verta MacDonald. Bill has been cremated. No funeral services will be held at this time due to the Covid 19 pandemic. A celebration of life will take place at a later date. The family is requesting memorial contributions to be made to the Alzheimer’s Association, 225 N. Michigan Ave. Fl.17, Chicago, IL. 60601; http://act.alz.org/donate "His Wings Were Ready, But Our Hearts Were Not" You may offer condolences at www.austinandbell.com Service entrusted to Austin and Bell Funeral Home and Cremation Service, Hendersonville. 615-822-4442.

The family of William Eugene Clark created this Life Tributes page to make it easy to share your memories.

Send flowers to the Clark family.